Global climate change creates serious, measurable risks to human health. According to the EPA’s Fourth National Climate Report, one of the most dangerous effects of global climate change in the Midwest is increasingly extreme heatwaves. Air pollution, which contributes to lung and cardiovascular diseases, is exacerbated by periods of extreme heat. Rising temperatures and heavier rains also “supercharge” toxic algal blooms that can make our water undrinkable. The same conditions allow disease-carrying insects to proliferate, increasing the risk of diseases such as West Nile Virus and Lyme disease. 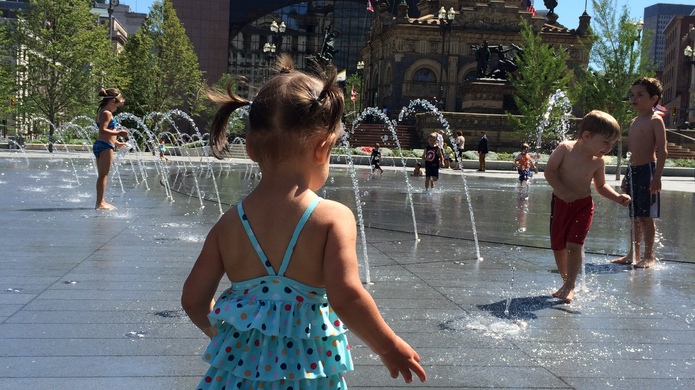 When it comes to extreme heat, risks to Ohio’s children pile up. Children are especially vulnerable for a few reasons: their bodies aren’t as good as adults’ at regulating their internal temperature, they spend more time outside than the typical adult, and the youngest rely completely on others to make sure they’re safe. The potentially life-threatening effects of extreme heat include dehydration, hyperthermia and fever, according to the U.S. Global Change Research Program. Extreme heat can also cause or exacerbate kidney problems in addition to exacerbating respiratory diseases.

Kids who live in cities are in double jeopardy: Heatwaves will be even more intense in urban areas, where asphalt, pavement and buildings radiate heat, and where cooling greenspace is limited. The result is a “heat island,” where air temperatures can be as much as 22 degrees higher than they are in surrounding rural areas. Those islands heat up a big proportion of Ohio—cities cover a bigger share of land here than in all but seven states. Nearly a quarter of Ohio’s children—more than half a million—live in Ohio’s 10 largest cities, where our heat islands are hottest.

Almost as many Ohio children live in households with incomes below the poverty line. Kids in poverty are more vulnerable than others, partly because it’s harder for them to access air-conditioned spaces, and partly because some diseases, such as asthma—which is more common among kids than adults—are even more common among kids living in poverty, and they’re exacerbated by extreme heat.

Compared to other parts of the country and the world, Ohio has thus far been insulated from the most dramatic effects of climate change. While unprecedented storm surges turn coastlines into shallows, historic wildfires reduce communities to ash, and rising sea levels threaten entire countries, we’ve seen subtler symptoms in the Midwest. But the threat climate change poses to our kids is just as disturbing, just as powerful a motivation to act.

Governor Mike DeWine and Ohio lawmakers are hammering out the 2020-2021 state budget. As they do, they should consider health impacts to Ohio’s children from climate change and take measures to ameliorate existing impacts and invest to reduce Ohio emissions that contribute to climate weirdness. For instance, making Ohio’s Earned Income Tax Credit refundable could help Ohio’s low-income families purchase asthma medication for their children, obtain membership to a local pool where children can cool down, or perhaps purchase an air conditioning unit.

Second, 31 percent of Ohio’s carbon emissions come from transportation – especially solo car trips. We should be investing heavily in public transit, electric vehicle infrastructure and safe infrastructure for biking and walking to promote more environmentally-friendly transportation options and reduce the transportation sector’s ongoing emissions contribution to climate change. Policymakers should make sure the promised $70 million for public transportation stays in the budget. Although it’s less than half of what we need to meet Ohio’s demand for transit, it’s a huge improvement over the $39.5 million a year in the last budget and will give more Ohioans a chance to get to work, school and run errands while lowering their carbon footprint.

Third, we should also be strengthening Ohio’s clean energy standards, not gutting them. Electric power accounts for 39 percent of Ohio’s carbon emissions. The standards, which have been under attack ever since they were enacted, save consumers money and encourage growth in the state’s wind and solar industries, creating thousands of jobs and moving us away from reliance on polluting fossil fuels. Improving the standards will be good for Ohio’s economy and the health of our kids.

Visionary proposals like the Green New Deal may be what we need to do in the long term, but there are steps Ohio leaders can take today. And they should, because things are likely to get worse before they get better—and every day we hesitate, the less likely they are to get better at all.

Our children’s health is at stake.