Standing up to the tax scam: News from Policy Matters

Standing up to the tax scam: News from Policy Matters

They call this reform? The U.S. Senate voted to approve a tax bill that would explode the deficit, give huge paydays to the top 1 percent and lead to devastating cuts to important programs like food aid, education and health care. We’ve been speaking out about why this plan is bad for Ohio and this week Researcher Katie Fallon produced an interactive map and congressional district fact sheets that show some of what’s at stake. Working with the Institute on Taxation and Economic Policy, we’ve shown how the richest Ohioans benefit most while over time, many of the rest of us end up paying higher taxes. Keep calling your senators and representatives to demand that they have a conference committee to give citizens a small chance to change this train wreck. And make sure you’re registered if you want more responsive representation next time around…

Meanwhile, in Columbus… State lawmakers are cooking up a tax boondoggle of their own, trying to push through the rural growth tax credit in the budget corrections bill. Senior Project Manager Wendy Patton explained the tax credit would add $45 million to the state’s $9 billion in tax code spending — resources that could be used to fund public transit, education and more. Moreover, other states that passed the credit failed to create jobs in rural areas. The Governor vetoed the credit in the budget and he should do so again in the corrections bill. 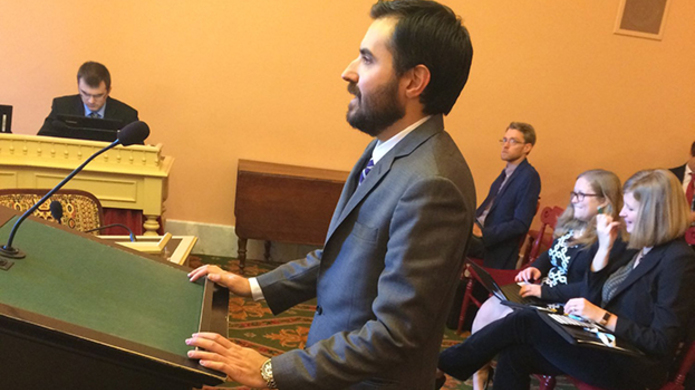 Workers at risk: State lawmakers revived a bill to bar undocumented workers from protection under Workers’ Compensation. Researcher Michael Shields (pictured above) testified against the bill before the House Insurance Committee this week. If it passes, the bill would “give a competitive advantage to companies that break the law,” he told the committee. “That would put all workers employed by those firms at risk, shift the cost of Workers’ Comp to law-abiding employers, and shift the cost of treating these workers to the public and overstrained hospital emergency rooms.”

Bag it! Cuyahoga County Council is considering a proposal to place a small fee on disposable bags used to bring products home from stores. Policy Matters intern Taylor Swift (not the superstar) writes that if it passes, the ordinance could mean a cleaner, greener Cuyahoga County.

Out and about: Earlier this month, Development Manager Cynthia Connolly delivered a show-stopping presentation at the Center on Budget and Policy Priorities Impact Conference. She told her story about when she realized that policy matters and how she leverages philanthropy to defend everyday Ohioans. See a video of the talk above. Coming up, Researcher Katie Fallon will speak on a panel about health care organized by the Upper Arlington Association and Kennell and Associates, Inc. in Upper Arlington on December 5. Ohio has one of the lowest severance taxes on oil and gas drilling in the country. On December 6, Wendy Patton will explain why Ohio should bring its rate in line with other states and how that revenue could benefit communities. Sign up for the webinar here. Outreach coordinator Daniel Ortiz will co-facilitate two talks with the Center for American Progress as a part of their listening tour, The New Work Plan for America, on December 7th at the Northshore AFL-CIO office in Cleveland.