Defend kids: Federal programs help almost all of us in some way or another, but they are especially important for children. The GOP tax bill that passed at the end of last year grows the deficit and puts pressure on lawmakers to cut spending. We’ve created an interactive map and congressional district fact sheets that show how many children rely on federal assistance to get enough to eat, get health care, and have a place to live. Another map breaks down the numbers by county. It’s part of our effort to bring you robust data and analysis about what the tax overhaul and potential budget cuts could mean to you. 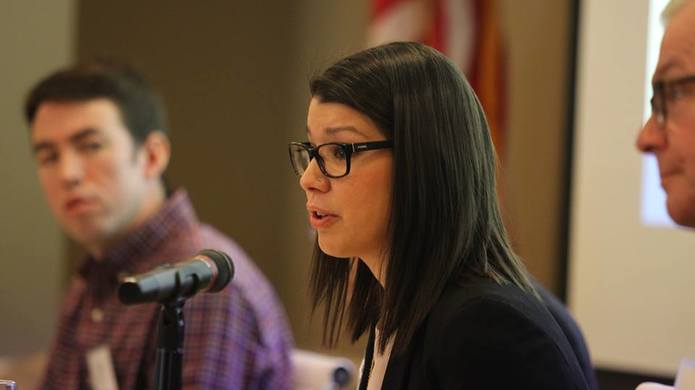 Protect Ohio’s democracy: From voting rights to gerrymandering, advocates, attorneys and activists are trying to make sure Ohio’s democratic systems work for our citizens. Our national partner Demos took on Secretary of State John Husted before the U.S. Supreme Court, arguing against Ohio’s practice of purging registered voters who haven’t voted in two or more years. Policy Matters intern Tessa Perry explains what’s at stake for Ohio and the nation if the court rules the wrong way. Meanwhile, advocates back in Ohio have been collecting signatures to put a congressional redistricting measure on the statewide ballot in November. They want to end the highly partisan process we use today. In 2016, Ohio’s closest congressional race was decided by 18 points, according to Policy Matters intern Taylor Swift (not the popstar). The less competitive the election, the less voters’ voices are heard.

Stop tip theft: On Monday, the Department of Labor will close public comments on a proposed rule that would allow employers to confiscate the tips earned by workers. On top of that, the DOL hid a study that showed how damaging the rule would be to people who work for tips. Mike Shields writes that nationally, the rule would take an estimated $5.4 billion a from workers a year – including $224 million in Ohio alone. If you’ve worked for tips, know someone who does, or ever left a tip, take some time this weekend to let the DOL know you oppose this plan.

In the community: Cynthia Connolly (pictured above) spoke about how nonprofits can lend their voices to public debates at a workshop sponsored by The Raymond John Wean Foundation. Amy Hanauer talked about the harmful implications of the GOP tax overhaul at the First Unitarian Church of Cleveland. Daniel Ortiz met with staff from U.S. Rep. David Joyce’s office to talk about how budget cuts to vital programs would harm children in Joyce’s district. Wendy Patton joined allies from the Foodbank, Inc. in Dayton to ask U.S. Rep. Turner to protect health care and other critical supports for families. We’ll continue to work with partners and advocates to educate our congressional representatives about the importance of safeguarding programs that keep us healthy, help us get a good education and put roofs over our heads.

Coming up: Today at 11 a.m., join Amy for a town hall meeting with U.S. Rep. Marcia Fudge at the Lawton Center in Akron. She’ll be discussing the consequences of federal tax changes. We’re sponsoring a screening of the documentary “Zero Weeks” on Wednesday, February 7 in Columbus. Be sure to get your tickets. The film explores America’s lack of paid leave and what that means to working people. The screening will be followed by a panel with State Representatives Kristin Boggs and Janine Boyd, and State Senator Charleta Tavares. Wendy will join Dayton mayor Nan Whaley for a stop on The Repeal the TrumpTax 100-day national tour. Advocates, activists and organizers will come together on Friday, February 9 from 1-2 p.m. at the Sinclair Community College Conference Center, Building 12 Meeting Room 116, 301 W. Fourth St. Dayton, OH 45402