When our elected leaders properly fund public programs, they protect us from swings in the economy and natural disasters, like the coronavirus (COVID-19) epidemic that is flooding hospitals and shutting down the economy. The pandemic is costing millions of people their incomes and health coverage. As the COVID-19 virus spreads, they will need to quickly enroll in Medicaid. When they created Medicaid more than 50 years ago, President Lyndon Johnson and members of Congress structured the program to grow at times like this, providing health care to people who need it and supporting hospitals and the health care system. At the same time, Medicaid pumps funds into the economy through the paychecks of hospital and health care workers. These workers use that money to pay their rent or mortgage, buy food in local grocery stores and otherwise support their local economy. Medicaid gives lawmakers a fast and effective way to protect people while stimulating a shrinking economy. Federal lawmakers have used[1] this tool in prior recessions under both Democratic and Republican administrations.[2]

The federal government has just started to implement this critical response. The “Families First Coronavirus Response Act,” signed into law on March 18, 2020, boosts the federal share of funding for state Medicaid programs by $35 billion. Before the pandemic and looming recession ends, lawmakers will need to provide much more.

This issue brief explains how Medicaid financing works, how it cushioned Ohio’s economy in the past and can again in this current crisis, and further steps policymakers should take as illness spreads.

Medicaid provides health insurance for people who earn too little to both meet basic needs and pay for health insurance. Adults enrolled in Medicaid can make no more than 138% of the federal poverty level ($17,609 for a single person, about what a full-time minimum-wage worker earns).[3] Children in families with incomes at or below 211% of the federal poverty line ($45,829 for an adult with two children) are eligible for coverage under Medicaid.[4] Medicaid covers healthcare for nearly 3 million Ohioans, almost a quarter of all of us.[5] Total spending on the program was $26 billion in 2018. Of that total, the federal government paid $18 billion.

The federal share of a state’s Medicaid program is known as the Federal Medicaid Assistance Percentage (FMAP). Each state has a different FMAP. A state’s FMAP is based on a formula that takes into account the average income per person for each state relative to the national average. By law, the FMAP cannot be less than 50% of the cost of care. Ohio’s 2020 FMAP for basic Medicaid programs is 63.02%. The federal government matches at different rates for different Medicaid programs. Ohio expanded Medicaid coverage to low-income adults in 2014; the federal share for that program (“Medicaid expansion”) is 90%.[6] Children in low-income families who earn too much to be eligible for Medicaid’s “Covered Families and Children” program, but less than 211% of poverty, are covered by the State Children’s Health Insurance Program. The federal government’s share of that program is 85.6%.[7]

Medicaid is the third largest domestic program in the federal budget after Medicare and Social Security. It is the largest program in the Ohio budget. Because Medicaid is a partnership between state and federal governments, it is both a state expenditure and Ohio’s largest source of federal revenue. This unique structure makes it an ideal venue for the federal government to provide fiscal stimulus.[8]

In Ohio, the Medicaid expansion alone supports an estimated 54,000 jobs.[9] The health care sector employs thousands of workers in every county of the state. Federal funds pumped into the economy via Medicaid reach across all of Ohio.[10]

The state must balance its budget, and between 2008 and 2010, state tax revenues plummeted. Congress provided $103 billion for Medicaid through the American Recovery and Reinvestment Act (ARRA) in response to the last recession.[11] The act provided a 6.2 percentage point increase in FMAP for all states; protected them from decline in FMAP due to changes in the formula and provided extra aid to states with big jumps in unemployment.[12] Ohio received an estimated $3.5 billion in additional FMAP funding between 2009 and 2011. In 2010, Ohio’s ARRA-enhanced FMAP rate was 10% higher than in 2011, when the regular FMAP was resumed.[13] Without this, and other infusions of capital for other programs, lawmakers would have had to slash critical services.[14] Medicaid and other safety net programs like food assistance (SNAP) and Temporary Aid to Needy Families (TANF) are counter-cyclical, rising as the economy falls and pumping dollars into the local economy. Chart 1 also shows how the federal share, indicated by the red line, falls swiftly as the economy recovers. 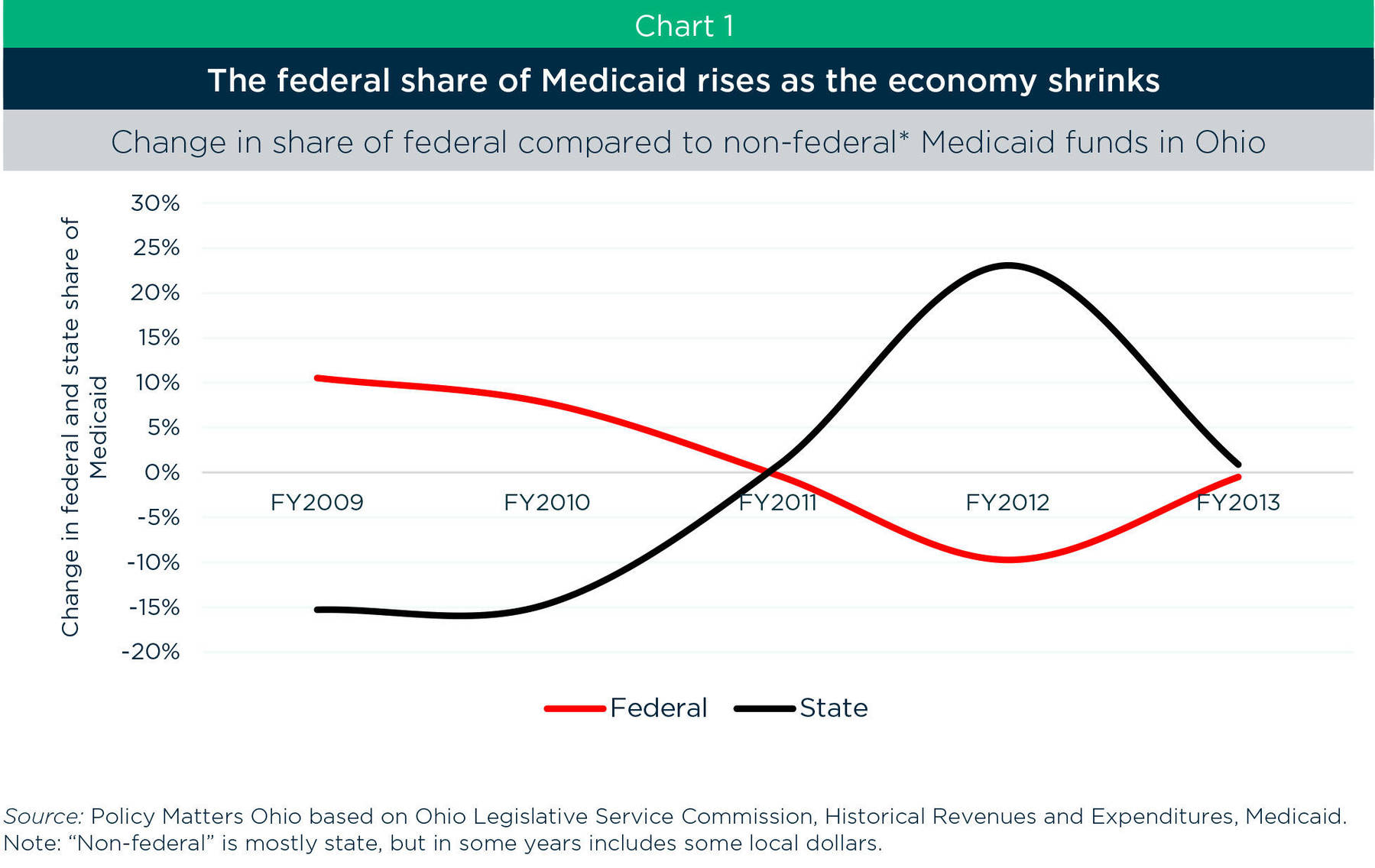 Medicaid FMAP in the coronavirus crisis

COVID-19 is spreading rapidly. The number of illnesses in Ohio is increasing exponentially. If Ohio Public Health Director Dr. Amy Acton’s projections prove true, as many as half of all Ohioans could be infected within a month. Measures taken to slow the spread are prudent, but even so, the threat remains dire.

The Families First Coronavirus Response Act appropriated $35 billion for an increase in the federal share of Medicaid, a little over a third of what Congress provided in the recession of 2009.[15] This will raise the FMAP for states by an estimated 6.2%, the same base percentage specified in ARRA, but without other provisions, like additional funds for states with very high unemployment. Ohio is expected to receive around $1.2 billion in additional FMAP through the Coronavirus Response Act, compared to the $3.5 billion received under the ARRA.[16]

The increase in federal FMAP may not be enough[17] to address the substantial budget shortfalls that would result from just a 1 percentage-point increase in unemployment.[18] Today, people are rapidly losing their jobs. The state received 139,000 claims for unemployment compensation in the first five days of the week beginning March 16, compared to just 6,500 claims the prior week. On March 19, the U.S. Labor Department reported that initial jobless claims jumped 30%[19] from the previous week; Goldman Sachs forecasts claims of 2.25 million in the week of March 23, 2020 - and that could be conservative.[20] The blow to state resources overall may be worse than in 2009.[21] During the last recession, state budget shortfalls totaled $600 billion, and the current downturn could be even worse. Ohio’s revenues plummeted, as they did in every other state (Chart 2).[22]

Chart 2 shows that total tax revenues fell by 12% between 2008 and 2009 and by another 5% in 2010: more than $3 billion over two years. The difference between that recession and the one looming now is that our leaders are deliberately halting the economy to slow the spread of COVID-19. Revenues will plunge and needs will spike much more rapidly. 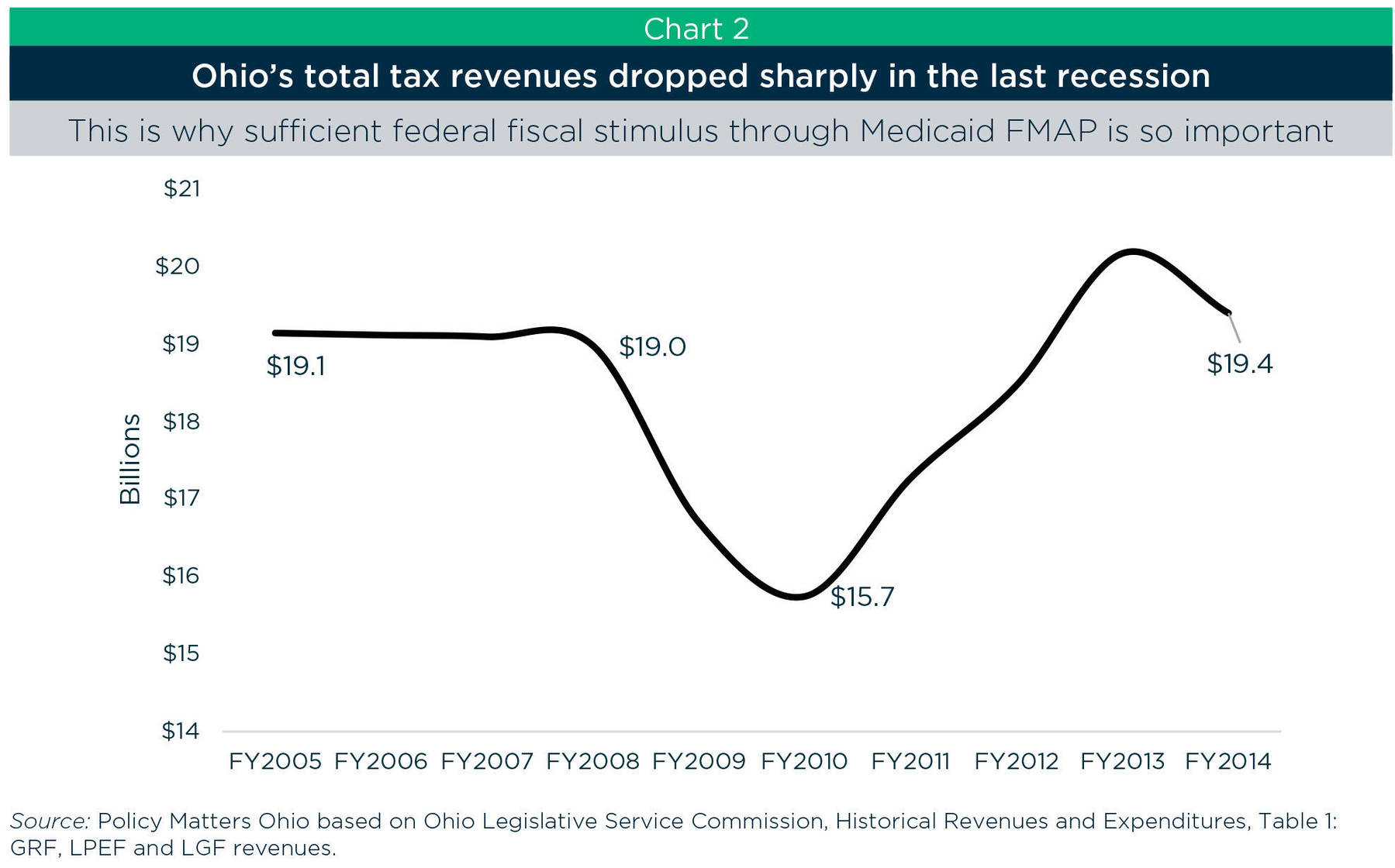 More aid to the states, particularly for FMAP, is needed now

The ARRA provided $282 billion in aid to the states through many programs, including Medicaid. The Coronavirus Response Act provides just $104 billion across all measures.

The National Association for State Budget Officials has called for FMAP to be increased to 12%, pointing out that costs will soar in this particular epidemic as Medicaid expenditures overwhelmingly go to the elderly and people with disabilities.[23] The Economic Policy Institute called on the federal government to fund all Medicaid expenditures over the next year,[24] so states can use resources to address other pressing needs.

During the last recession, Congress provided $104 billion to the states for Medicaid. Today’s federal lawmakers have already provided a third of that, but they must do more. The speed at which the pandemic is spreading is bringing the economy to its knees much more rapidly than the housing crash of 2008.

The Senate is preparing legislation for coronavirus aid. As this issue brief goes to press, Senators have failed to include additional aid to state and local governments. To keep health and human needs programs fully operational in the coming months and to counteract the swift contraction of the economy, they will have to provide more.

Public Health Director Amy Acton speaks to Ohioans daily during Governor DeWine’s afternoon press conferences. She tells us how to try to keep ourselves safe and tries to reassure us that we will get through this together. We will get through this, but how well we fare depends on whether Congress gets aid to people and the states. COVID-19 and its economic fallout will soon overwhelm state and local public services. Policymakers must meet growing health care needs and ensure fiscal stimulus reaches all communities with a significant increase in federal aid to vital safety net programs, particularly Medicaid.

[3] “Medicaid expansion & what it means for you,” Healthcare.gov at https://bit.ly/2UctbDj

[8] Snyder, Laura and Rudowitz, Robin, “Medicaid Financing: How Does it Work and What are the Implications?” Kaiser Family Foundation, May 20, 2015 at https://bit.ly/2xhSM4O

[17] Parrott, Sharon, et.al., “Immediate and Robust Policy Response Needed in Face of Grave Risks to the Economy,” Center on Budget and Policy Priorities, March 19, 2020 at https://bit.ly/2wBJlgq

[21] Bivens, Josh, “The coronavirus fiscal response should be as big as needed—but current forecasts indicate at least $2.1 trillion is needed through 2020,” Economic Policy Institute, March 20, 2020 at https://bit.ly/3bpuhBg