I just called to say “I love you,” and you deserve a progressive policy agenda.

I just called to say “I love you,” and you deserve a progressive policy agenda.

This Sunday is Mother’s Day: a day we allow mom to take time off, kick back, and relax. It’s a day we honor her sacrifices, praise her hard work, and let her know how essential she is in our lives. Sure – flowers, cards and candy are nice, but for the remaining 364 days a year, smart policy reforms can make mom’s life a lot easier. Here’s a gift we all can get behind. 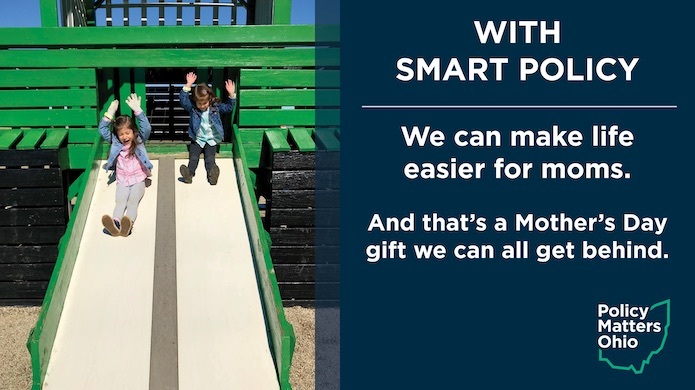 1. Paid time off for family and emergencies

In the United States, only 13% of the private sector workforce, and 4% of low-wage workers have access to paid family leave. And 62% of working Ohioans don’t benefit from the federal unpaid leave law because it either doesn’t cover them, or they can’t afford to miss the paycheck. If passed, House Bill 91 would provide much-needed paid family leave, giving new mothers time to bond with their baby, and more time to recover postpartum. It can also help moms (and others) caring for an aging parent, or a loved one recovering from an accident or illness.

A recent Demos study found income for a two-parent household drops by 14% when the family has children under 5. It’s even worse for single mothers. Once children reach kindergarten, family incomes rise and poverty rates fall. This is no coincidence. In Ohio, families of three earning more than $27,024 are not eligible for help with child care costs. High quality, affordable child care and pre-K improve educational outcomes and allow mothers to work more and earn additional income. It’s a public investment that really pays off. 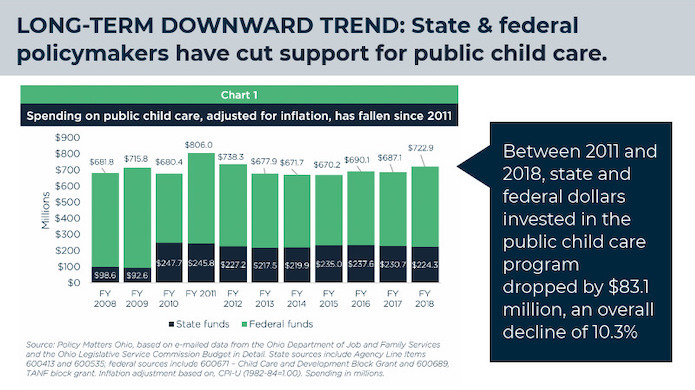 Infant mortality is a crisis in Ohio. Over 8,200 babies have died before their first birthday since 2010. Our state ranks 42nd out of 50 in infant mortality for all babies and 49th for black babies. This is heartbreaking and unacceptable. Infant mortality really stems from poverty and structural racism, so taking it on is a task that is too big for any one policy. Still, increased home visits for pre- and post-natal care can be an essential part of the solution, and can help with other challenges in the first year too. But in 2017, only 9,612 families were served by state home visiting programs -- or about 14% of Medicaid births. Laudably, Governor Mike DeWine has made increasing home visits a priority. Let’s help more new moms start off right.

Lead poisoning is a crisis across Ohio – especially in Cleveland. In the Cleveland Metropolitan School District, a staggering 93.5% of kindergartners had some exposure to lead. Exposure to lead, even at low levels, can damage a developing brain and cause educational, behavioral and health problems. Like many communities, the City of Cleveland does not require landlords to disclose lead hazards to potential renters – leaving mothers to uncover a problem after it is too late. Daycare facilities, including home daycares, are also not required to be lead-safe. Simple policy changes can protect our next generation. Mothers should not have to worry that where they choose to live or send their children for care could result in permanent brain damage for those children.

Despite increased worker productivity and falling unemployment rates, many Ohio jobs pay too little for many families to make ends meet. Seventy-two percent of Ohio mothers work. However, women are more likely to work in low-wage jobs. A $15 minimum wage by 2023 would lift wages for 2 million Ohio workers, 37 percent of the wage-earning workforce, and working mothers will have a much-needed income boost. 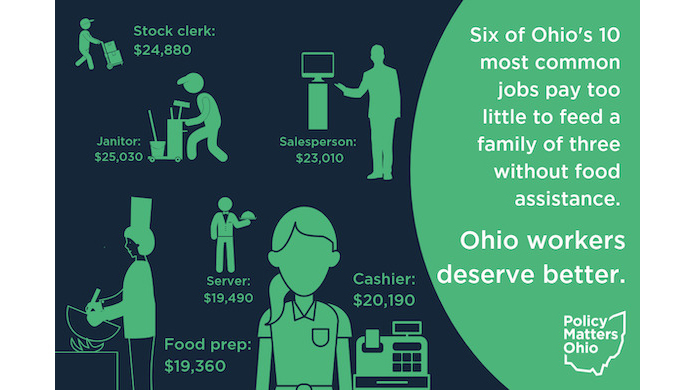 Every year, employers steal wages from 217,000 Ohio workers through minimum wage violations alone. Experts believe total annual losses are near $15 billion. Yet, due to state funding cuts, only six wage theft investigators oversee Ohio’s more than 5.5 million jobs. Wage theft is most common in low-wage jobs where women work – such as restaurants, home health care, childcare, and temp agencies. Failing to prevent wage theft has real consequences for working mothers, giving them less in their paychecks to support their families. 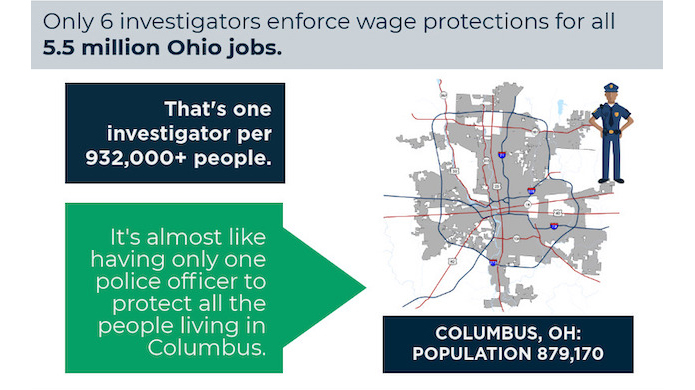 Despite some progress, the average Ohio woman is paid 78 cents to every one dollar a man makes. That disparity is worse among women of color. Occupational choice alone does not explain the gap. In every single one of the top 20 female-dominated professions, men earn more than women, both in Ohio and nationally. In Ohio, two-thirds of households are run by single moms. Supporting equal pay means mothers can better provide for their families – and this can be a reality, with the “Equal Pay Act” introduced in the Ohio House earlier last month.

Every mother wants her child to excel in school, and every district should have the resources it needs. Still, Ohio policymakers have consistently underfunded public K-12 education. Policymakers should support the Student Wellness and Success plan funding to provide mental health counselors and other wraparound supports for all students. Support for K-12 public schools means more mothers can send their children to safe, high-quality schools, no matter where they live.

In Ohio, nearly 1 in 10 households do not have a car. They rely on public transportation to get to work, school, the doctor’s office and more. Yet, Ohio’s support for public transit is among the weakest in the nation. This year, the state nearly doubled funding to $70 million annually for public transit, a huge increase. Lawmakers should fight to protect this funding so more moms can get where they need to go quickly and reliably.

10. Help moms earn their way out of poverty

In Ohio, the Federal Earned Income Tax Credit (EITC) alone helped more than 265,000 people earn their way out of poverty in 2016. Lawmakers took positive steps to improve the credit in the transportation budget, but can do much more good by making it refundable. Families who receive a refundable EITC have healthier babies, and kids that are more likely to go to college. That definitely gives mom something to smile about.